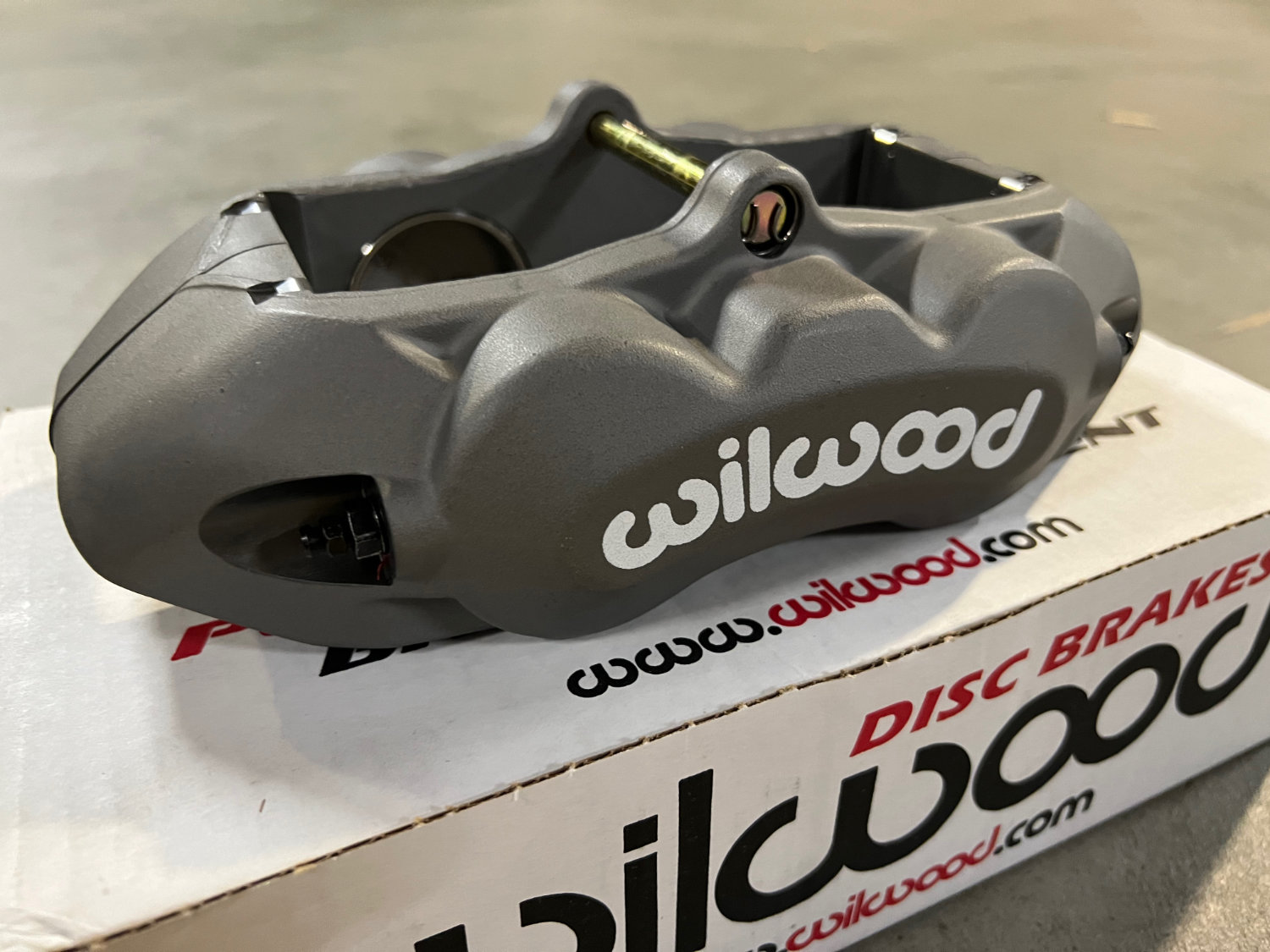 Wilwood D8-4 calipers in clear anodised finish are a good match for the original cast calipers.

1965 was the first year for disc brakes on the Corvette, in fact '65 was the year that most GM vehicles were first offered with discs. The OE Delco Moraine calipers featured 4 pistons with lip seals to keep the brake fluid from leaking out (more on that later).

When working correctly, these brakes do their job very well, however they are prone to leaks which can significantly (and dangerously) reduce braking performance. Many Corvette owners have had their calipers rebuilt with o-ring seals and stainless steel bores, but this is no guarantee of reliable long-term performance.

When I purchased the Red Rocket the previous owner mentioned that it had been pulling to the left under brakes, but that 'it was OK now'. When I had the car serviced the mechanic found that the rear calipers where leaking badly, so they were sent away for reconditioning (without consulting me unfortunately). Had I been given the option, I would have replaced the calipers with the Wilwood kit there and then, but the rebuilt Delco Moraine calipers seemed to work OK, and overall the braking was pretty good.

Fast forward a few years, and with the Covid-19 lockdowns in Australia, the Corvette sat for months without being driven. I noticed a growing pool of fluid on the floor under the left side of the car — the caliper was leaking! The front calipers had already been rebuilt with o-rings and stainless bores by a previous owner — but they'll leak if left sitting for too long.

When the car was driven again the brakes worked OK, and the leak disappeared (I guess this is what happened to the last owner too). But after a few drives I noticed fluid on the right front wheel — now that caliper was leaking. Braking was now scarily uneven, with the car pulling badly to the left.

The only permanent fix for leaking Corvette calipers is to replace them. If you're using factory wheels (15" diameter) and want a bolt-on solution there's really only one choice, the Wilwood D8-4 kit. This kit uses a 4-piston caliper with the same volume as the OE calipers (so you can use the factory master cylinder) and accepts the same D8 pads as the factory caliper too. Wilwood do offer a 6-piston caliper kit (D8-6) but I could see no benefit in fitting these for street driving.

I ordered the Wilwood kit for the Corvette in April 2021 (as soon as I saw that pool of fluid on the floor) — the box finally arrived at my door in January 2022! Covid has made it increasingly difficult to get parts, particularly in Australia, so your car projects need to be planned well in advance. I ordered new discs too (Australian-made by DBA) — thankfully they arrived in a couple of weeks.

With all the parts in hand, the first challenge to overcome when fitting the kit was the original factory discs. Corvette discs were riveted to the hub from the factory (they must have expected them to last forever!). These rivets need to be drilled-out to replace the discs. Surely the discs on the Red Rocket aren't 57 years old? They must have been changed at some point in the past.

The rivets are hidden behind the knock-off adapters, so I removed the adapters to reveal — the original rivets, untouched! It's hard to believe that discs could last this long, but their time has finally come.

I took the car to Sydney Corvette specialists S R Performance to have the brakes fitted. They've done plenty of Wilwood installations on Corvettes, so they knew exactly what needed to be done, and how to deal with any problems they might encounter.

They started by removing the hubs from the car with the riveted discs attached. This makes it possible to drill the rivets out using a drill press. Once the old discs were removed, the hubs were refitted (with the bearings repacked at the same time) and the new discs installed. They also fitted shiny new dust shields and dust caps along with the braided stainless lines supplied with the Wilwood kit.

Wilwood warn that there may be clearance issues with some after-market alloy wheels, particularly knock-offs. Sure enough, when the wheels were refitted there were clearance issues. It was necessary to fit a 4mm spacer between the hub and the knock-off adaptor, and even with this spacer S R Performance had to carefully shave some metal off the calipers to gain the necessary clearance.

With everything back together, the brakes were bleed before road testing and a second bleed. The finished result is superb, delivering solid, safe braking and great pedal feel. 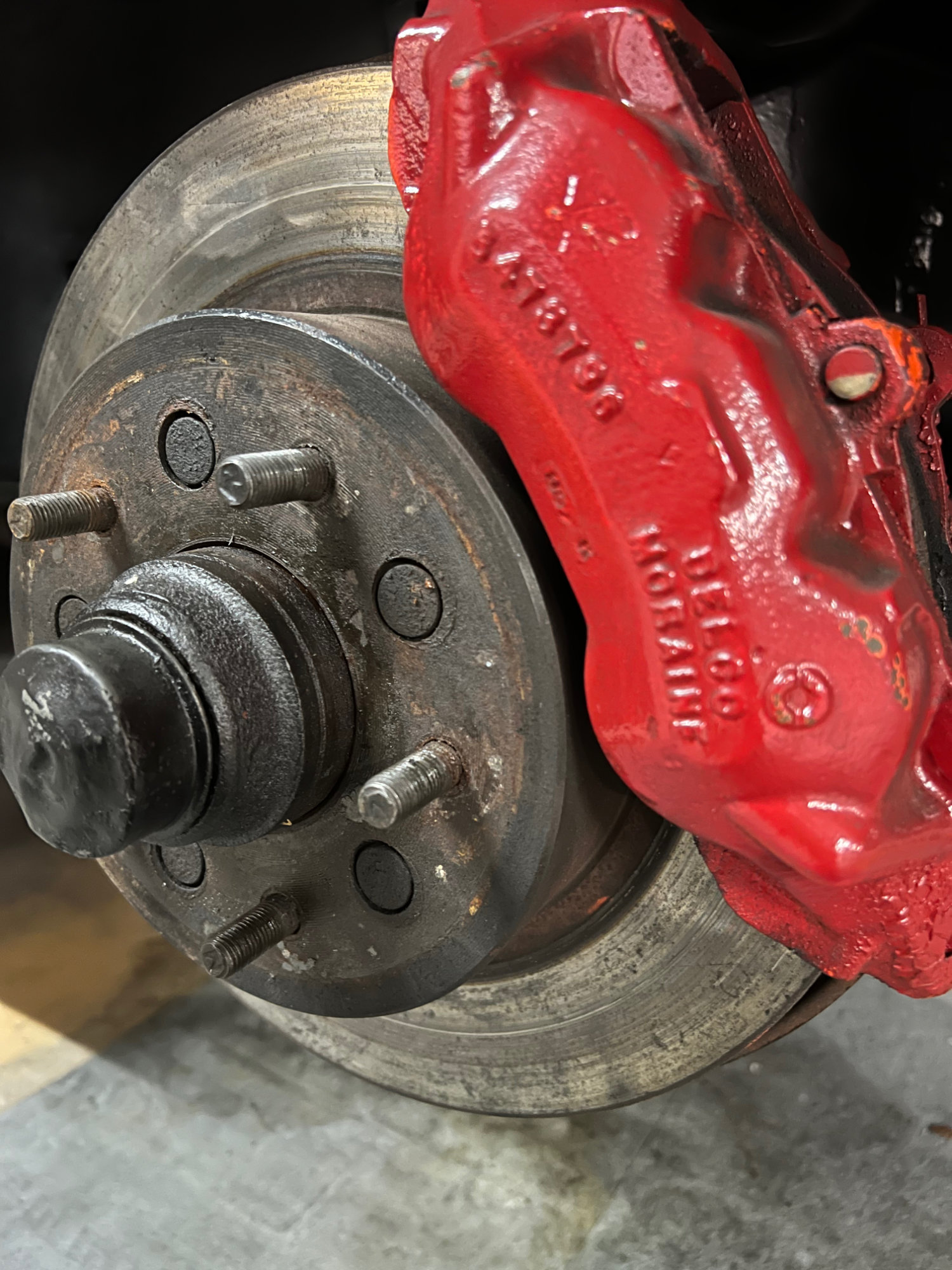 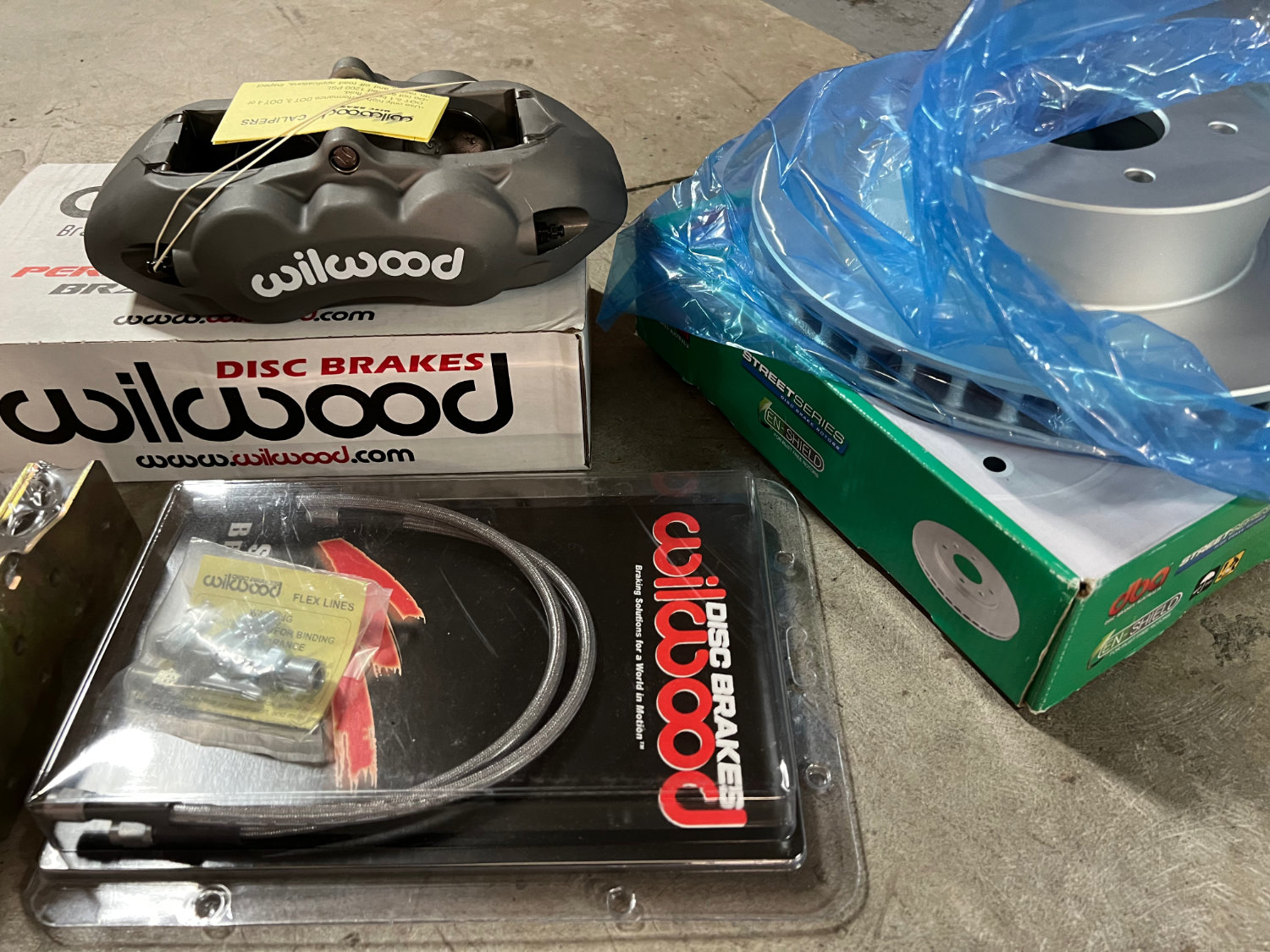 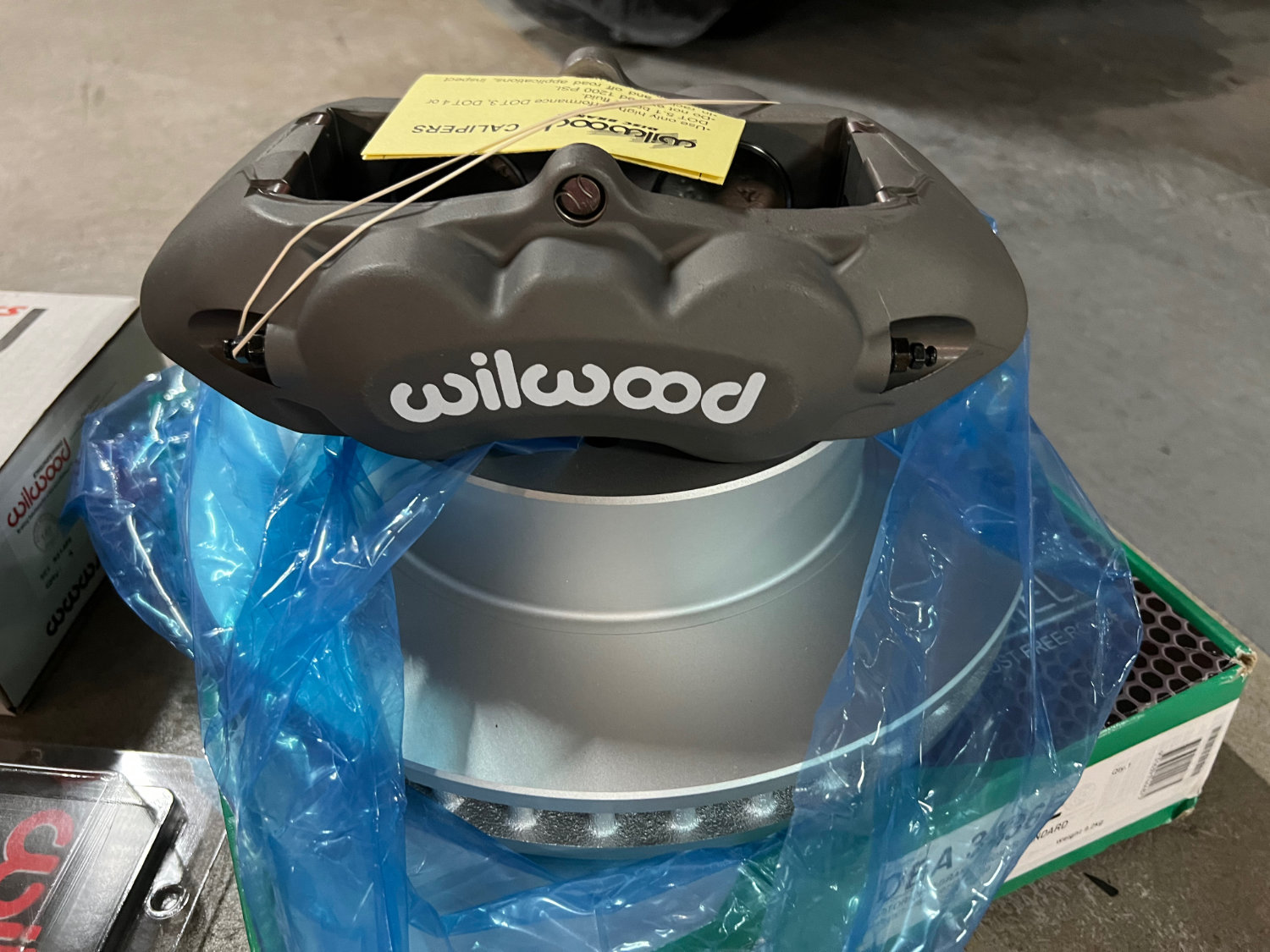 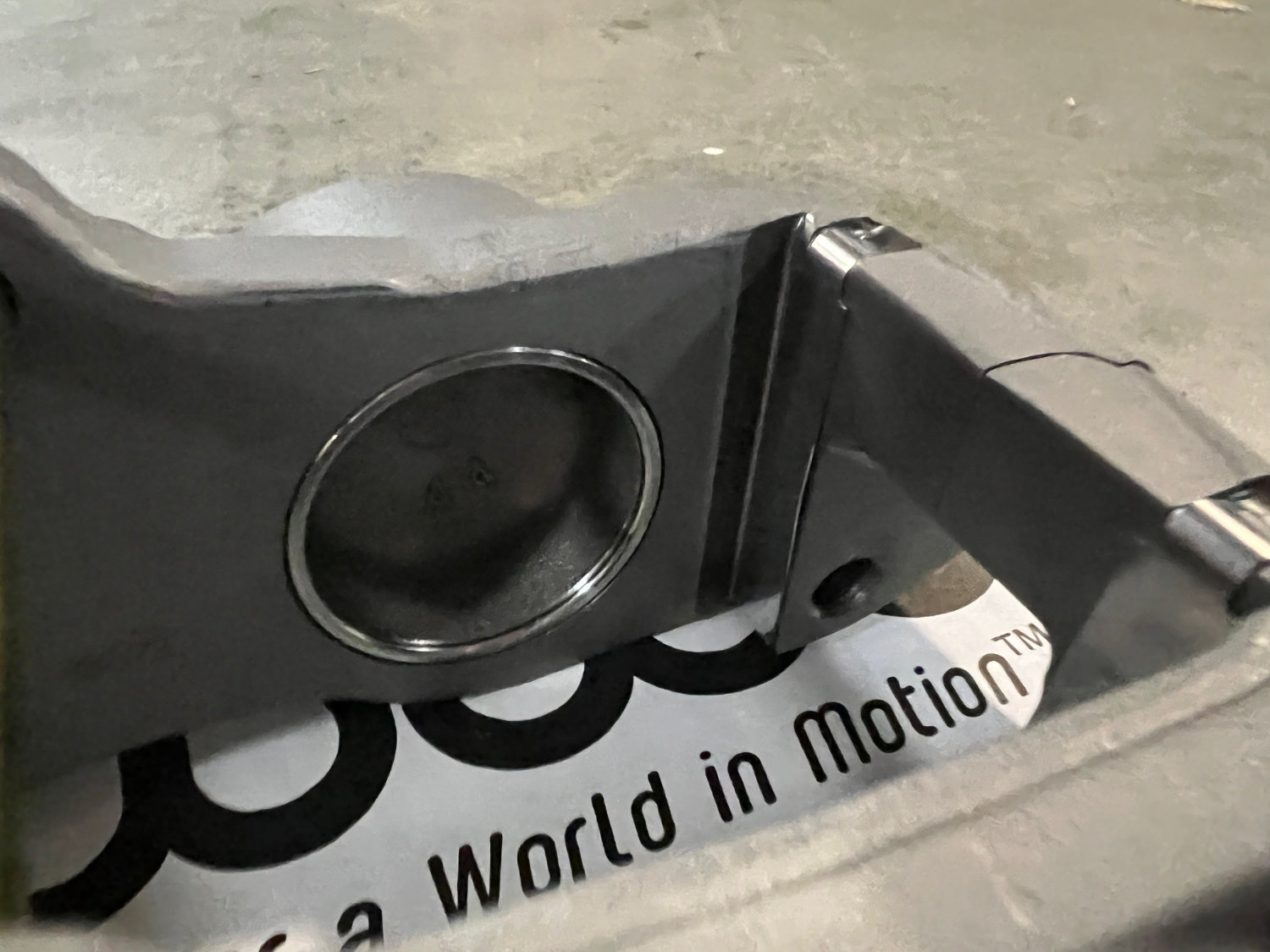 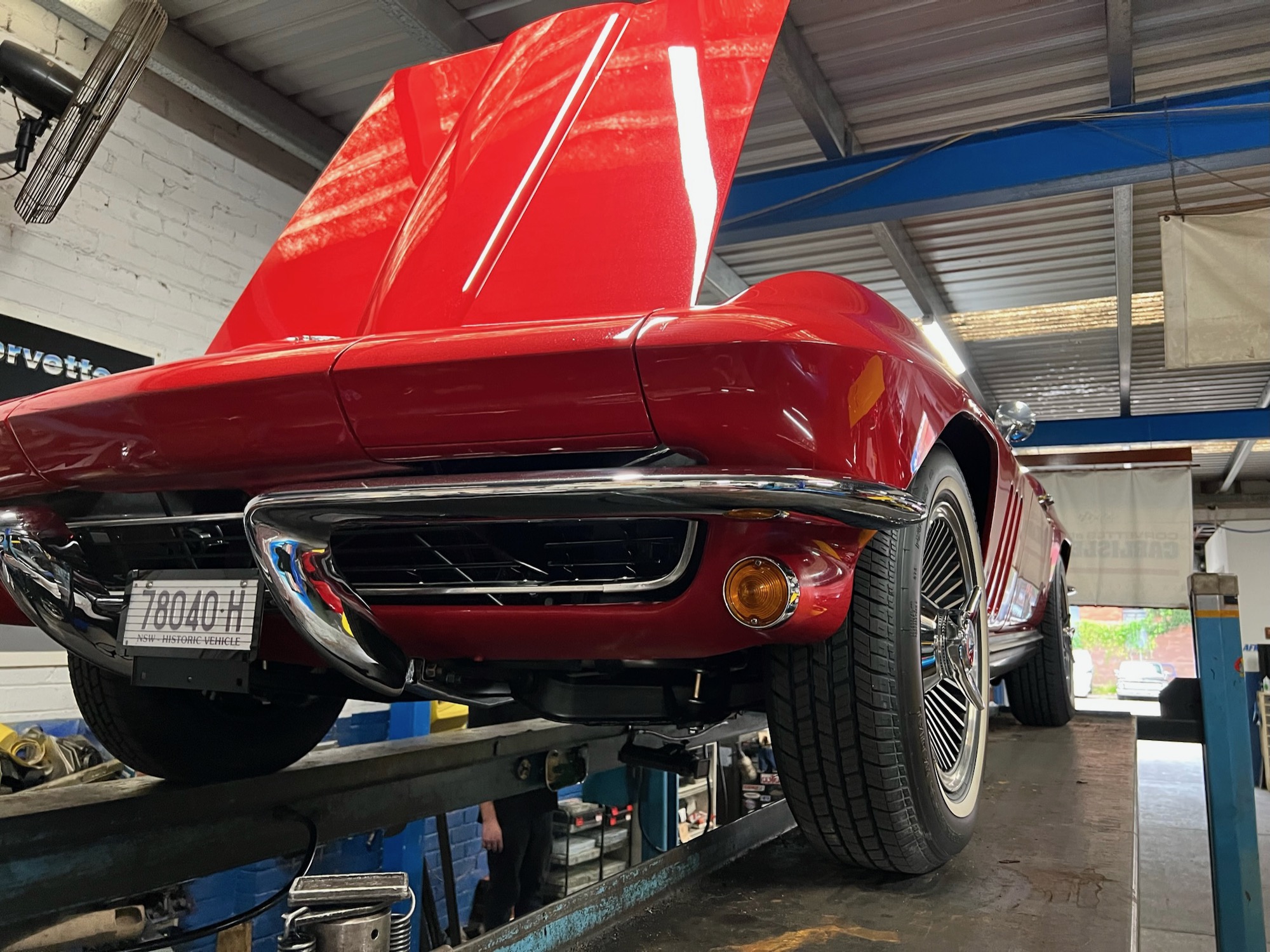