The Red Rocket was born between late January and February 1965. The engine block was cast on January 20th, the heads on January 30th, with the final engine assembly completed on February 2nd. The body was created by A. O. Smith in Ionia on February 10th before final assembly at the GM St. Louis plant on February 20th. After being detailed at Lew Williams in Sacramento on March 9th, the car was delivered to its first owner, Mr Lee A. Day, on March 10th 1965.

Styling alterations in 1965 included a smoothed-out hood (with no scoop indentations) and three functional vertical exhaust vents in the front fenders (replacing the nonfunctional horizontal vents from the 63-64 model).

The Red Rocket's body shows no evidence of crash damage or repairs (all the original bonding strips are intact), in fact the fiberglass looks remarkably new in places. The underside of the car has never been painted — it’s still raw fiberglass as it came from the factory. The factory job number on the right side of the firewall is also still clearly visible.

The Red Rocket underwent a ‘body-on’ restoration in the 90’s, and it appears that the body had not been removed before or since — it's possible the body has never been removed from the chassis. 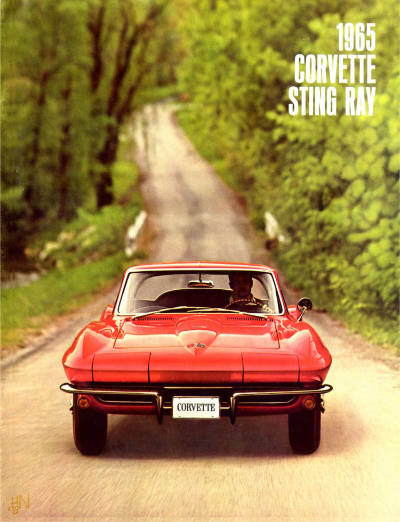 For more facts and figures, click the image above to download the original 1965 Corvette Sting Ray sales brochure PDF.

The definition of ‘matching numbers’ is contentious — how many numbers need to ‘match’ for a car to be considered ‘matching numbers’. Unfortunately forgery is rife in the Corvette world, with even entry-level cars being faked — for this reason I have not published any of the Red Rocket's numbers on this site.

I believe the Red Rocket deserves to be called a matching numbers car. The engine block, cylinder heads, intake manifold, exhaust manifolds, bellhousing, gearbox and rear-end are all original to this car. The body tags are also correct and unmolested.

“Your tags look very good. To be 100% sure of the trim tag one would have to microscopically examine for the proper tool marks as delineated in the NCRS trim tag book, but I see no issues with your tags.” 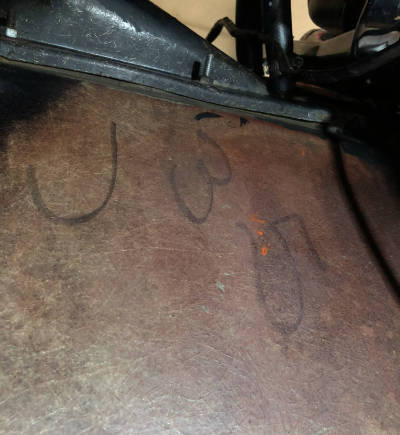 Above: The number J35 written in crayon on the right side of the firewall is the A. O. Smith body plant job number. Numbers in Ionia were assigned in groups of 500, with a letter at the beginning to indicate the group (A being the first group of 500, B the second etc…). Bodies made in St Louis typically have numbers only (with no letter prefix).
Specifications
Engine
327ci 350hp V8 (RPO L79 – a new high-performance engine for ‘65)
Transmission
Muncie M21 Close Ratio (all L79’s had the close ratio 4-speed in ‘65, it was an option in '66). Date code P0213 (Muncie plant, Feb 13 1965)
Rear Axle
Independent with Positraction differential (claimed to be a 3.7:1 ratio but measured as 4.11:1, which agrees with the code AP stamped on the diff housing). Date code 11465 (Jan 14 1965)
Brakes
Delco 4-wheel ventilated disc brakes (new for ‘65). Now upgraded to Wilwood calipers on the front.
Exterior colour
Rally Red (a new colour for ‘65 that featured in Corvette brochures and advertising)
Interior colour
Red (now with leather seats, vinyl was fitted from the factory)
Factory options
Non-factory options
Modifications
VIEW MORE '65 CORVETTE SPECIFICATIONS