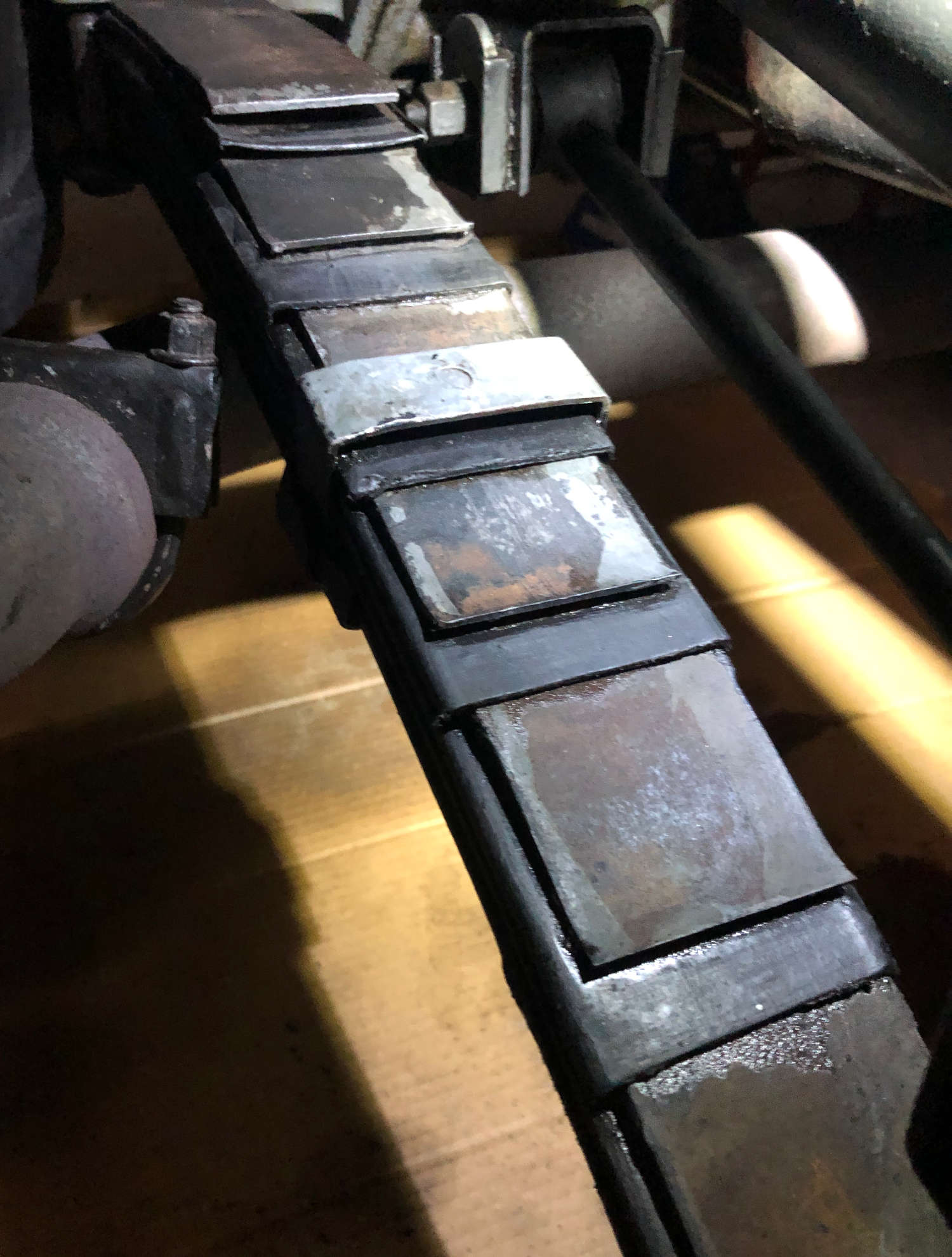 The 7-leaf, heavy-duty rear spring that forms part of the F40 suspension package.

The Red Rocket is fitted with the rare F40 heavy-duty suspension package. The F40 package used in 1964 and 1965 was derived from Z06 parts used in 1963. It included a thicker (15/16in) front sway bar, heavy-duty front springs and a 7-leaf, heavy-duty rear spring. Unique shock absorbers and thicker rear shock mounts were also included (the Red Rocket has Koni shocks now). The F40 springs lower the car approximately 1 to 1.5 inches and are significantly heavier than standard (550lb/in vs 280 front, 305 vs 140 rear).

There seems to be some disagreement in Corvette circles regarding which cars could be ordered with the F40 option in 1965. Some say it was only available on fuel injected (L84) small blocks, however an NCRS technical article by Larry Linder states that NCRS judges and judges at Bloomington and Springfield say they have seen several documented L76 (365hp) 1965 cars with the F40 package. They also say there is no documented case of an original 250 or 300hp car with the F40 option. From 1966 onwards the option was renamed F41, and was definitely only available on big-blocks.

Could the Red Rocket, an L79 (350hp) small block, have been ordered in 1965 with the F40 suspension package? Given that the car's first owner was a mechanic at the Lew Williams Chevrolet dealership, and would have had intimate knowledge of the options available, it's possible the car was ordered with the package, or that it was fitted at the dealership. There is no evidence of the package being fitted by another owner (no receipts for example), so it's possible it was factory or dealer fitted.

The Red Rocket also has a small rear sway bar. This was not part of the F40 package, and '65 small block Corvettes were not fitted with a rear sway bar from the factory (it was offered for big blocks only). It's generally agreed that a small rear bar is a good idea, as the heavier F40 front springs and sway bar introduce understeer — the rear bar helps to make the handling more neutral. The rear bar would have been available for big-block cars around the time the Red Rocket was delivered (March '65), so it may have been fitted at the same time as the F40 package.

I can vouch for the fact that the heavy-duty suspension helps the Red Rocket to corner very flat, and on smooth roads the ride is comfortable — but bumps are best avoided!