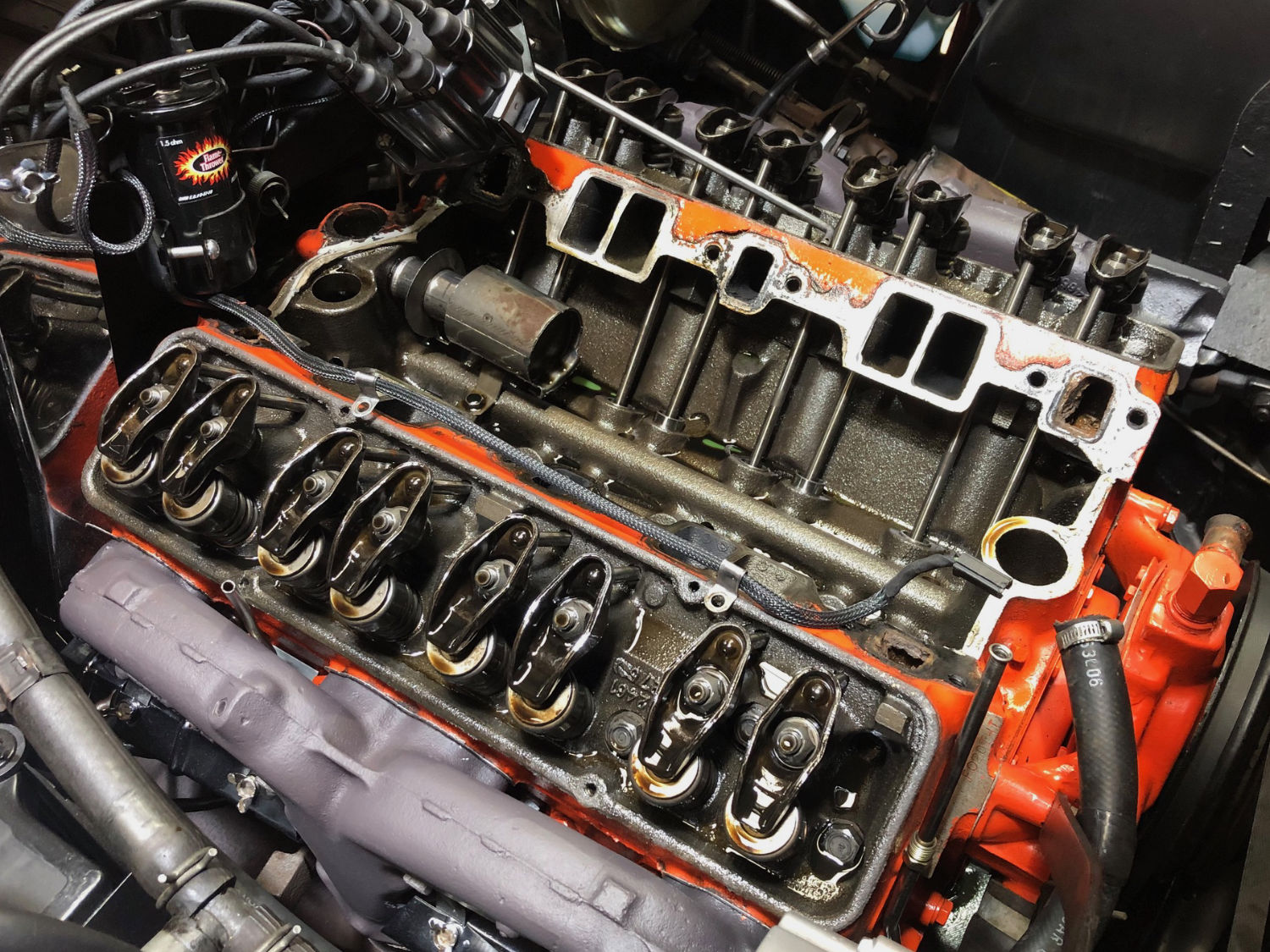 The start of the engine rebuild saga — the intake manifold comes off to check the valve train, the left head is next to come off.

For most of my first 2 years driving the Corvette the engine had performed flawlessly. It went on to 7 cylinders a couple of times, but on both occasions I'd traced the problem to a loose plug lead.

In early 2020 I had the same issue again, but this time the problem was not leads. By removing leads from the distributor with the engine running I traced the issue to cylinder number 1. When I removed that plug it was very oily, and when I inspected it closely there was also a chip in the insulator. I figured that the plug was faulty, and that it was oily because it hadn't been firing. I fitted a fresh spark plug and the engine was back to it's old self.

2020 turned out to be a bad year. The global COVID-19 pandemic, and the lock-downs we endured in Australia, meant that the Corvette sat in the garage for months without being started. I tried to use the time productively, doing quite a few maintenance tasks, including replacing the fuel pump.

I finally got to drive the car regularly again in October, and almost straight away I had problems with the engine dropping cylinders. This time it wasn't just number 1, it seemed to be more than one cylinder. I took the car to my mechanic, and he found both cylinders 1 and 3 had oily plugs. Cleaning the plugs had the car running nicely again, but my mechanic warned me it was probably faulty valve guide seals leaking oil in to the cylinders, and suggested I consider getting the heads reconditioned. This advice proved to be prophetic.

A couple of weeks later, on my regular Sunday-morning drive, the car just wasn't feeling right. Anyone who has driven an old car like this knows that you become very tuned-in to the engine sounds and feeling. Unlike modern cars, where it can be hard to tell if the engine is even running sometimes, the small block in the Corvette feels alive, it truly is the soul of the car. My gut told me something was not right.

On my regular drive there is one place where I can (legally) give the car a good blast. A traffic light leads directly to a freeway on-ramp, so I can accelerate from 0 to 100km/h as fast as I like. I usually run to 5500rpm in 1st and 2nd and then back off, I'm easily doing more than 100 at that point — the old girl is still quick, even by modern standards. On this day I was a bit more gentle, I didn't want to push my luck given I had doubts about the engine, but right away things felt strange. Normally, when you get off the gas, you'll feel strong engine-braking — now there was nothing. Lifting-off, the engine speed would drop slowly, with no engine-braking at all. When I stopped at the lights the idle was high, over 1000 rpm — usually the car idles right on 750-800.

I knew I had problems, it was just a matter of how major (and expensive) it was going to be.

The car was driveable, so I took it to my mechanic and waited for the news. The pictures on this page tell the story of what they found. After making sure there were no vacuum leaks, they put a camera in cylinder 1 and 3. They looked very oily, and there was a chance there may be valve issues too.

The next step was to take a head off (the left side, where cylinders 1 and 3 are), you can see from the pictures below that the cylinders look very oily, and also that the valves in cylinder 1 look quite different to the others. It also looked like some valves were sitting a little high, as if they weren't fully closed.

One of the novel things about the C2 Corvette is that it's possible to remove the pistons with the engine in the car. Because the engine sits behind the front cross-member, you can drop the sump and access the conrod bolts. The pistons in cylinder 1 and 3 were removed, and oil-ring failure was diagnosed. The rings weren't broken, so there was no scoring of the bores, but they had lost all their tension.

At this point I'm hoping that a hone and new rings might be all that's required — maybe the engine doesn't even need to come out? This proved to be wishful thinking.

When the pistons came out it was clear that the rod bearings were not in great shape. There was evidence of the bearings being 'pounded', possibly due to detonation? There were other concerns too.

The engine had been rebuilt by a previous owner in 2008, at 68,800 miles — at little more than 10,000 miles ago. The receipts for that rebuild weren't making sense when we looked at the engines internals. The heads looked like they had never been touched, they still had steel valves, and original, o-ring valve stem seals. It's hard to believe that anyone rebuilding an engine in 2008 would fit o-ring seals when much better solutions exists. Similarly, why not fit stainless steel valves and hardened seats suitable for modern fuels?

There were other signs of poor-quality work. The oil pick-up had a very nasty weld on it (see below), something that could have broken off and gone through the engine. The pick-up should never have been welded. The original harmonic damper was still on the engine, but it was in poor condition and should have been replaced as part of the rebuild.

It was clear that the engine was going to have to come out and be completely stripped. I wasn't prepared to risk there being other problems, it was obvious that the previous engine builder had cut a lot of corners, so I gave my mechanic the go-ahead to rebuild the engine. 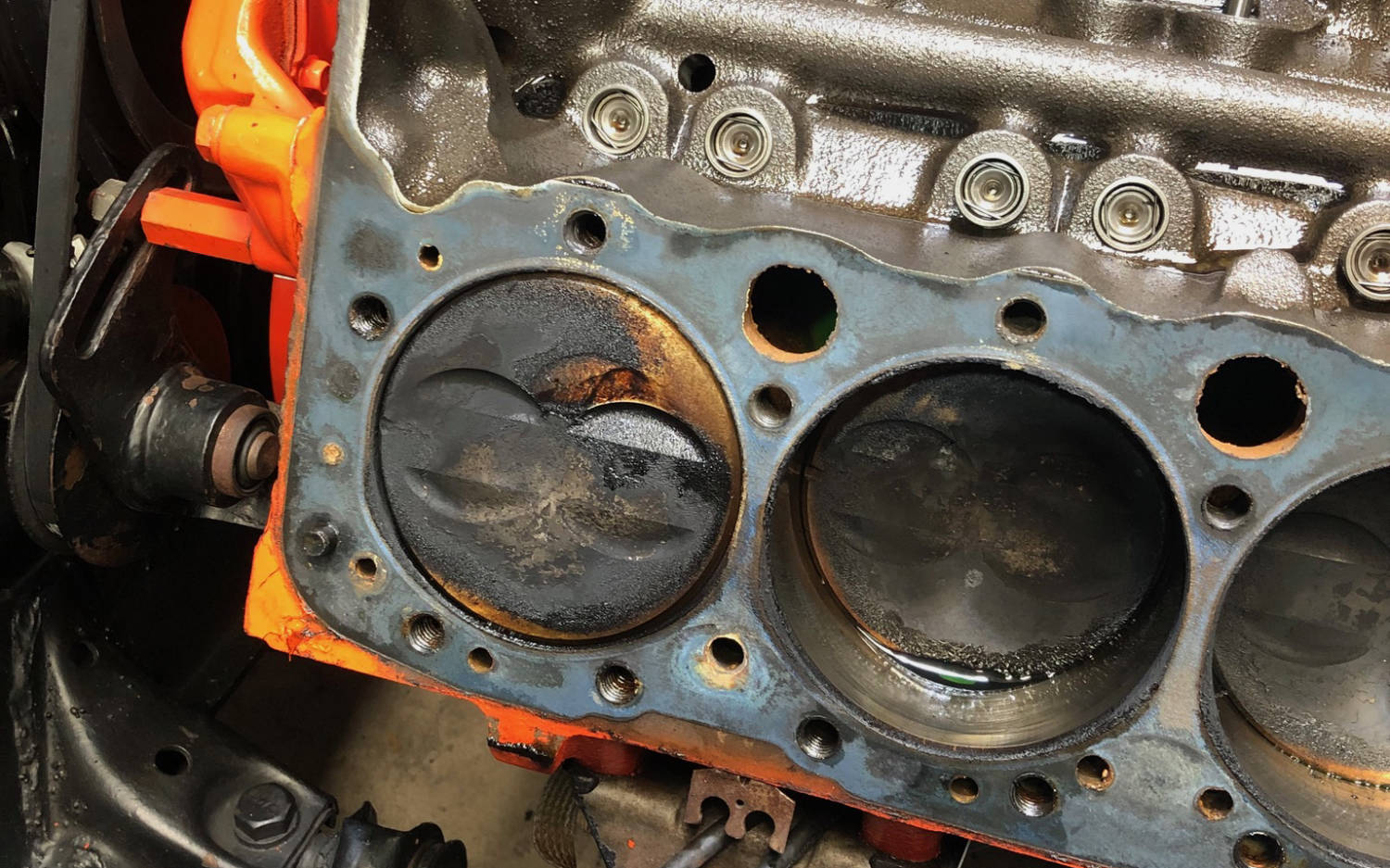 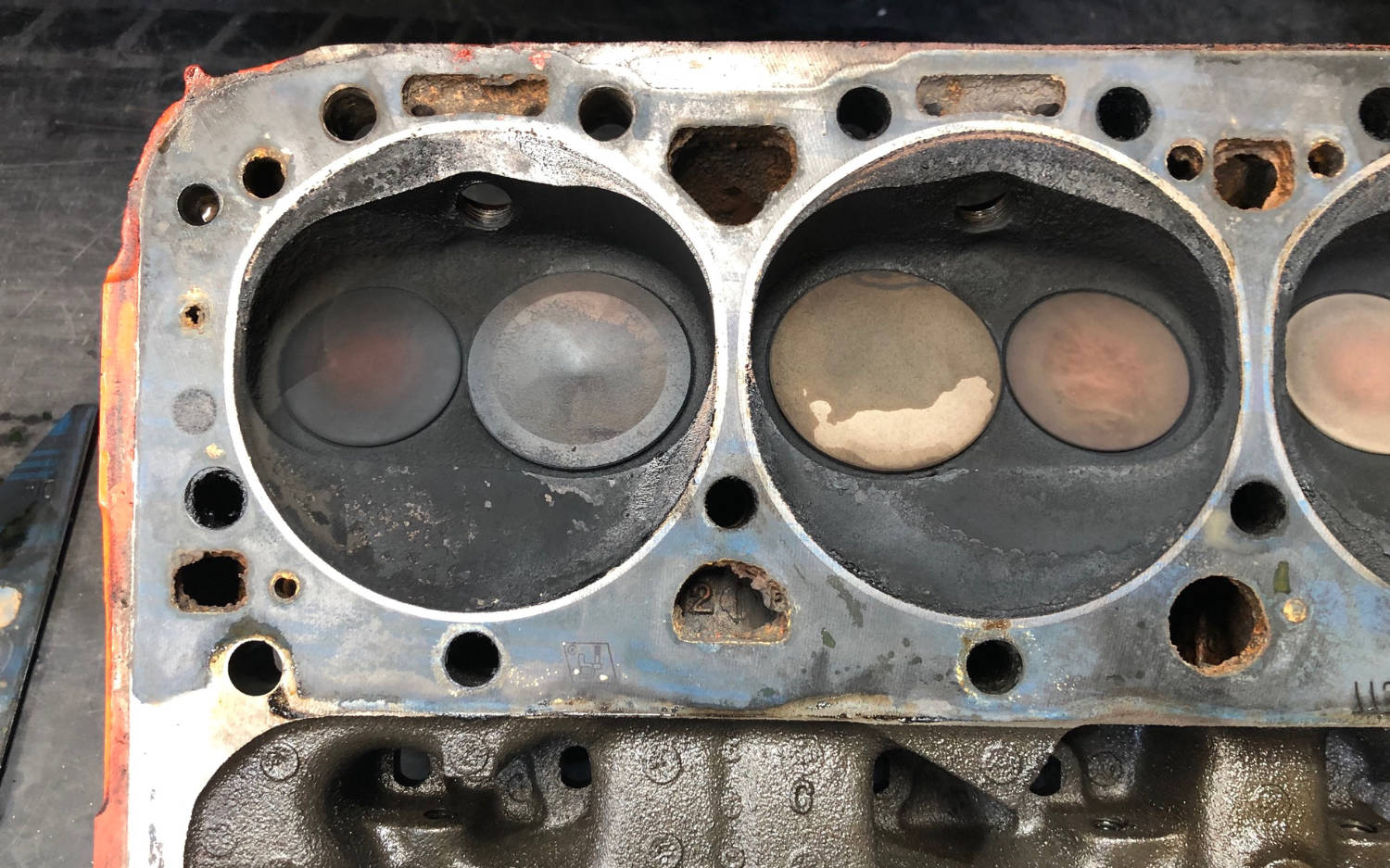 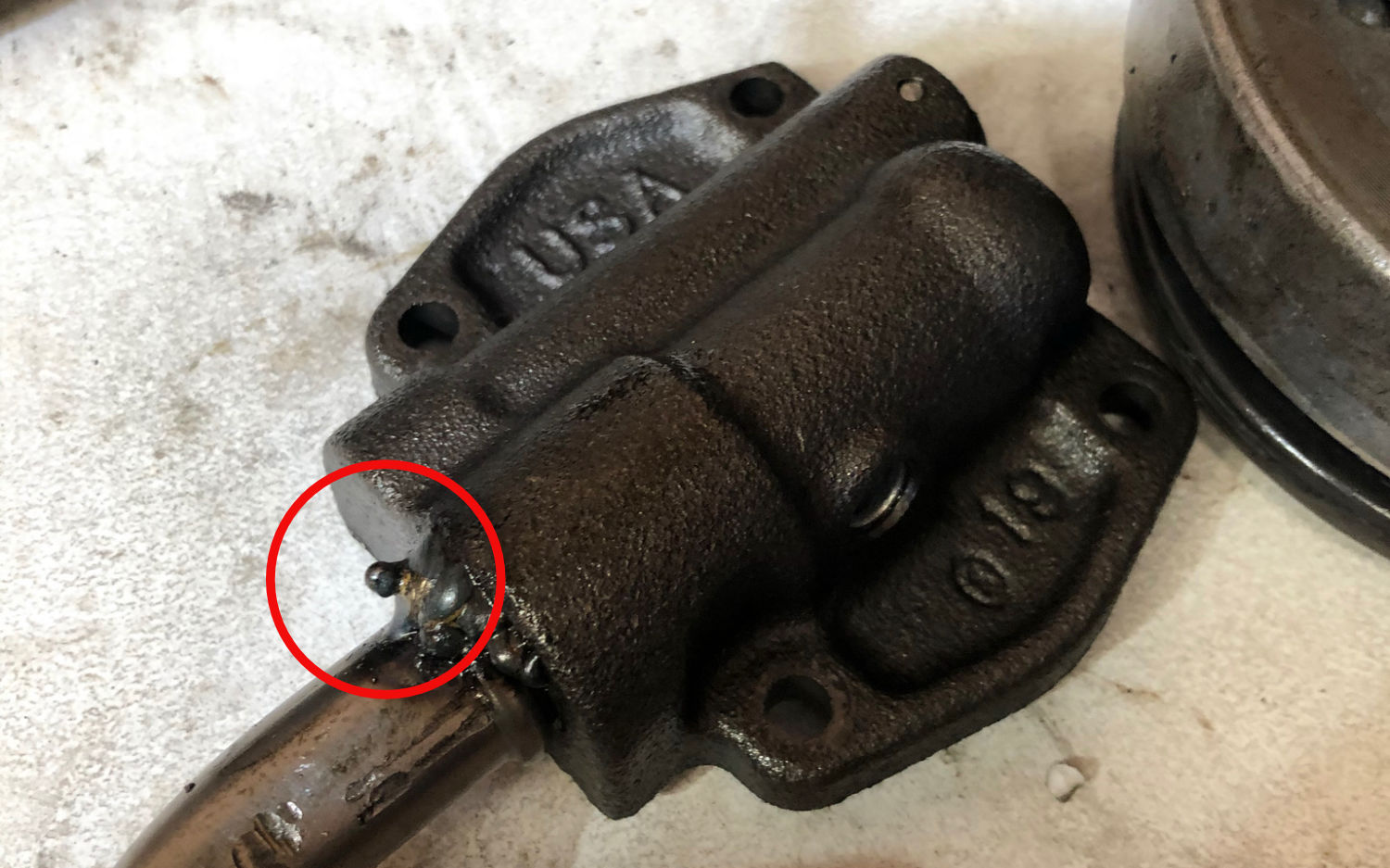 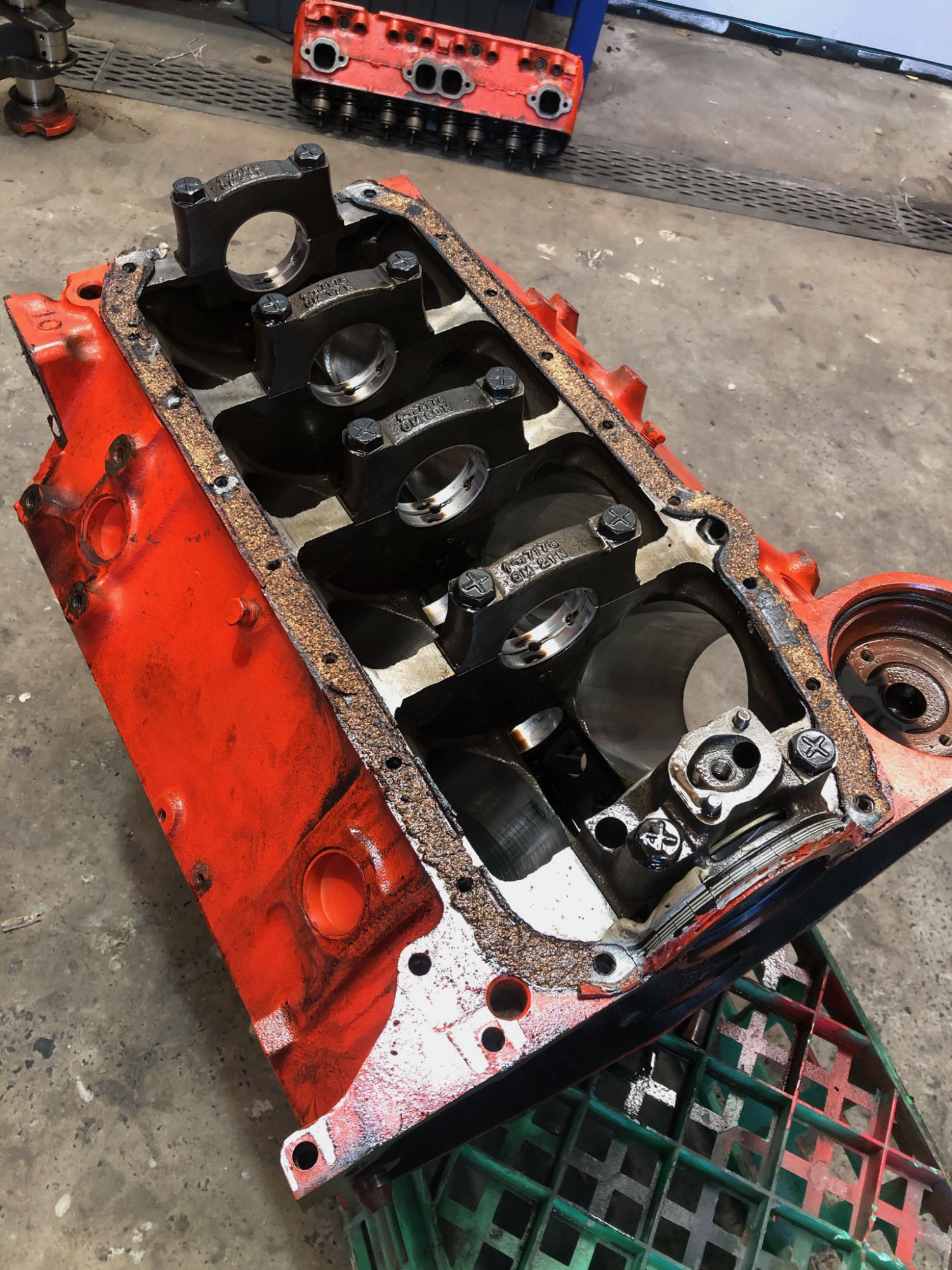 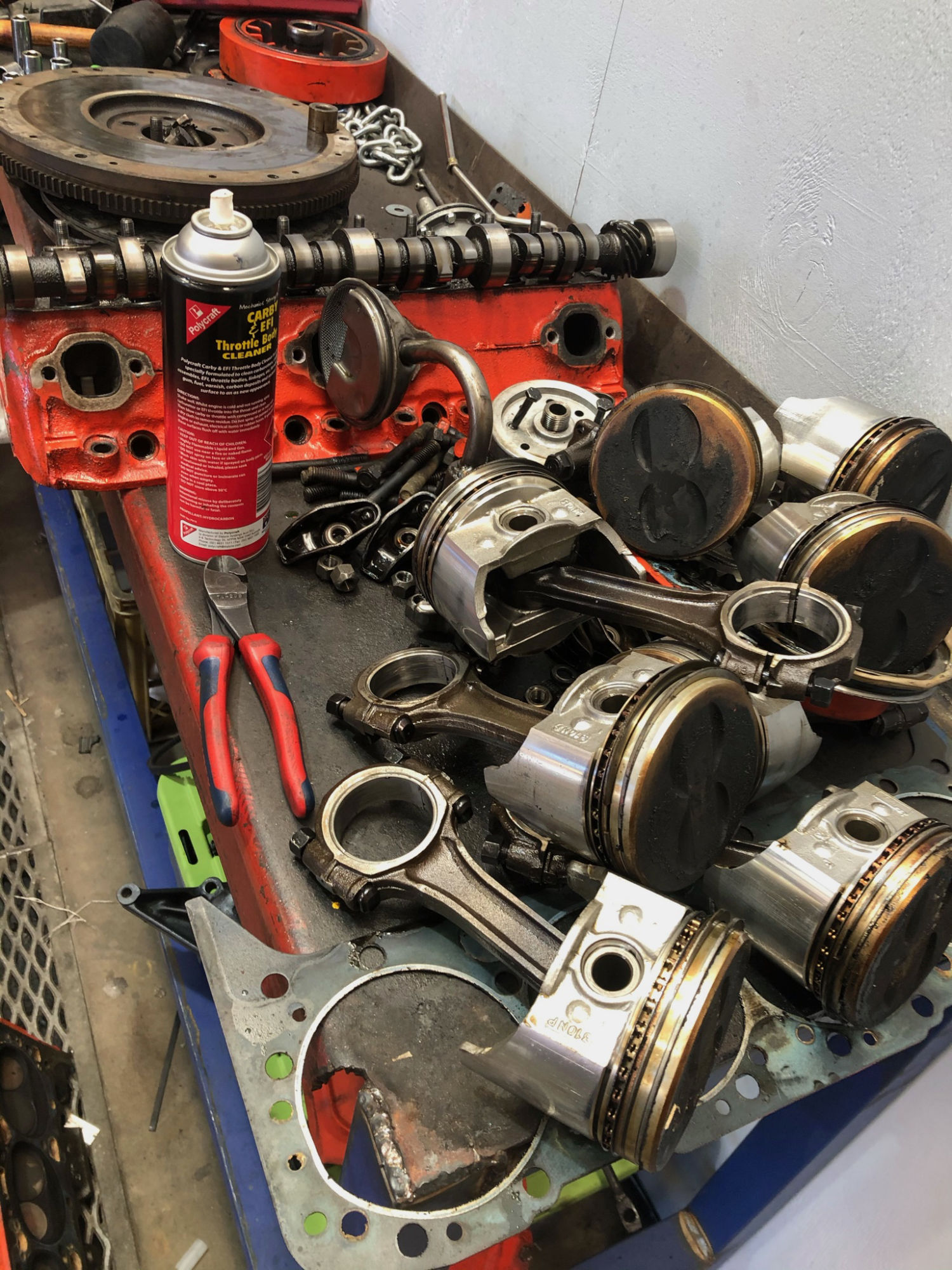 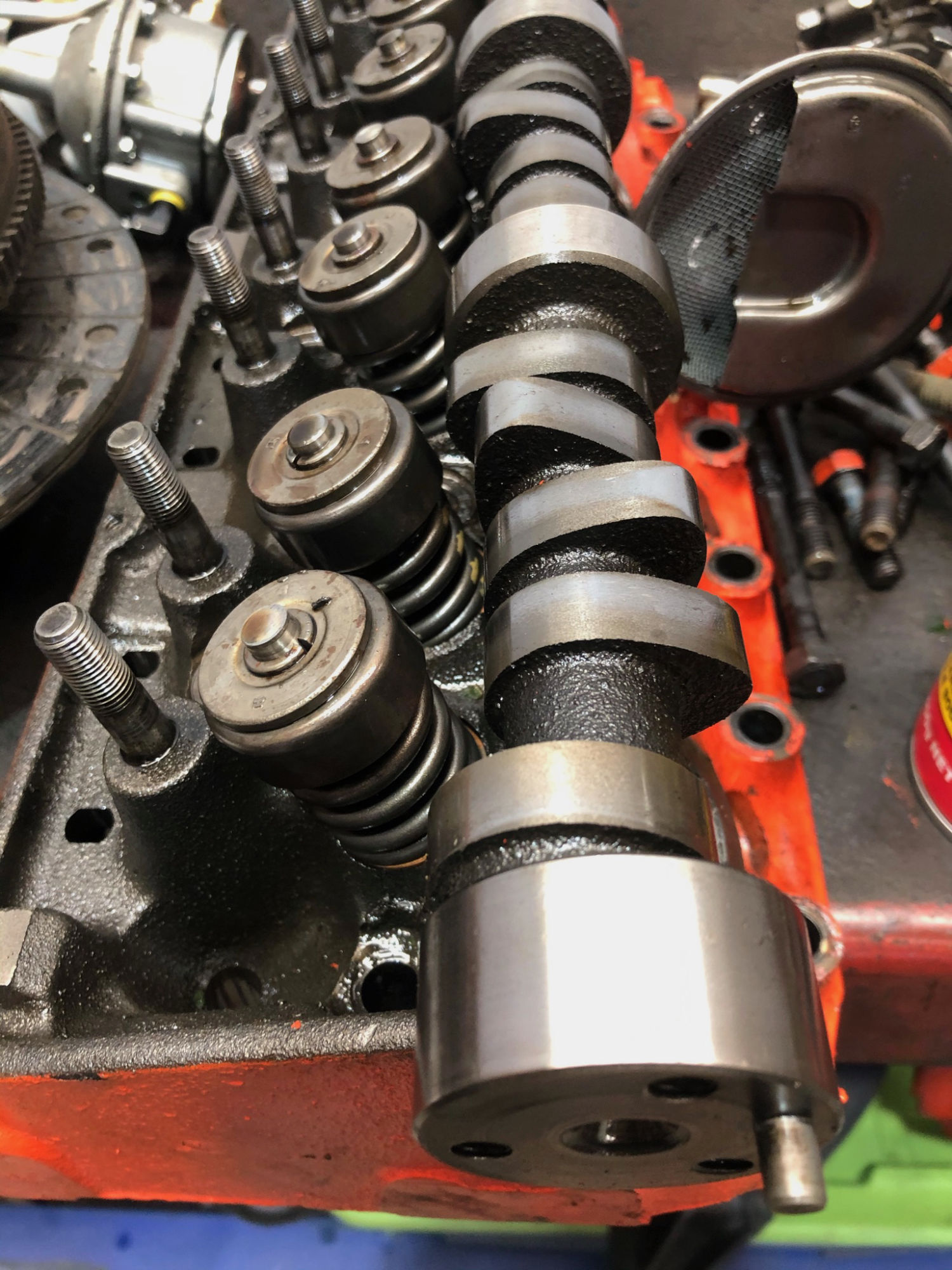 Engine Rebuild (Part 2)
do you know something about this car? get in touch
The Red Rocket is a ‘65 Corvette Sting Ray Coupe living in Sydney, Australia.